WORLD : At G-20 summit in Russia, Obama tries to build international support for strike on Syria” 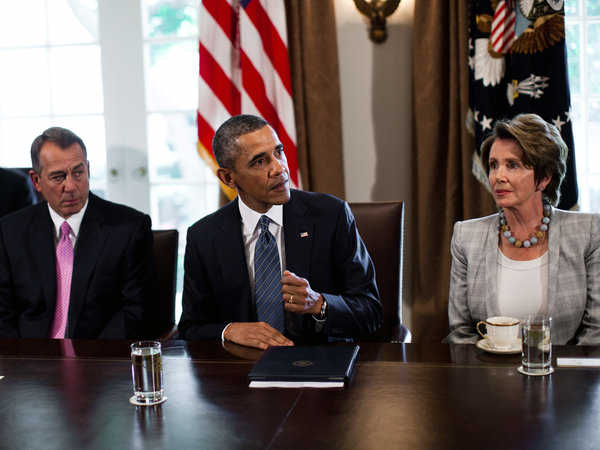 The White House later released a joint statement, signed by 11 of summit’s participants, calling for a “strong international response to this grave violation of the world’s rules and conscience” and expressing support for U.S. and allied efforts “to reinforce the prohibition on the use of chemical weapons.”

In a news conference after the summit concluded, Obama said he has been “encouraged” by his discussions with fellow leaders this week, adding that “there is a growing recognition that the world cannot stand idly by” in the face of chemical weapons attacks.Obama said he would address the American people from the White House on Tuesday about the situation in Syria as he seeks to drum up domestic, as well as international, support for a “limited’ and “proportional” strike. In response to questions, he declined to say directly whether he would go ahead with a strike if Congress votes down a resolution authorizing the use of force in Syria.

Obama said leaders at the summit agreed unanimously that a chemical weapons attack occurred in Syria last month and that an international ban on such arms must be maintained. And he said the majority were “comfortable with our conclusion” that the government of Syrian President Bashar al-Assad “was responsible” for the attack, although “obviously this is disputed by President Putin.”

“Where there is a division has to do with the United Nations” and the view of a number of countries that the U.N. Security Council must approve any military action against Syria, Obama said. He said his view, shared by “a number of people in the room,” is that given the Security Council’s “paralysis on this issue,” an international response is required that “will not come from Security Council action.”

The “Joint Statement on Syria” released by the White House was signed by leaders and representatives of Australia, Canada, France, Italy, Japan, South Korea, Saudi Arabia, Spain, Turkey, Britain and the United States. It condemned the “horrific chemical weapons attack” in the Damascus suburbs on Aug. 21. “The evidence clearly points to the Syrian government being responsible for the attack, which is part of a pattern of chemical weapons use by the regime,” it said.

It called for sending “a clear message that this kind of atrocity can never be repeated,” adding: “Those who perpetrated these crimes must be held accountable.” But the statement also recognized that the U.N. Security Council “remains paralyzed as it has been for two and a half years” while the Syrian civil war has claimed more than 100,000 lives.

“The world cannot wait for endless failed processes that can only lead to increased suffering in Syria and regional instability,” the statement said. “We support efforts undertaken by the United States and other countries to reinforce the prohibition on the use of chemical weapons.”

In a separate news conference, Putin, the summit host, said he met for 20 minutes with Obama on the summit sidelines but that the two continued to disagree on Syria.

“We stuck to our guns,” the Russian leader said, but he characterized the conversation as a friendly one. He said he listened to Obama’s arguments that the Syrian government must be punished for a chemical weapons attack that the United States says killed more than 1,400 Syrian civilians, at least 426 of them children.

“Everybody remained with his position,” Putin said. “We do not agree with those arguments, but still we can hear them. We’re trying to find an agreement toward a peaceful settlement of this crisis.”

“Everybody understood one another,” he said.

Russia has been the Syrian government’s staunchest defender and has categorically opposed an American military strike. A unilateral strike, Putin said, would be a violation of international law.

In response to a question, he confirmed Russia’s support for the Assad regime.

“Will we help Syria? Yes, we will,” he said. “We are doing it right now. We are supplying arms. We are providing economic assistance.” He said Russia wants to expand its humanitarian assistance to Syria.

The meeting with Obama came as something of a surprise. Obama had already canceled a pre-summit meeting with Putin in Moscow, and both sides said no private meeting was planned here.

Deputy national security adviser Benjamin J. Rhodes said earlier Friday that the Obama administration had no expectation that it could change Russia’s position on Syria.

Putin said that at the dinner of G-20 leaders Thursday evening, the United States was joined by France, Saudi Arabia, Canada and Turkey in urging action in response to a chemical weapons attack on Aug. 21. He noted that British Prime Minister David Cameron also supports a strike but has lost the ability to join in because of a vote in Parliament.

Joining Russia in opposition, Putin said, were China, India, Brazil, South Africa and Indonesia. Putin described Chancellor Angela Merkel of Germany as “cautious.” He also listed Italy as opposing a U.S.-led strike, but Italy was one of the countries that signed on to the joint statement backing the United States.

Also represented at the summit, but not cited by either the White House or Putin as backing one side of the other, were Mexico, Argentina and the European Union.

Obama pressed his counterparts on Syria in private talks on the sidelines of the summit. He was not necessarily seeking their military or financial support, U.S. officials said, but merely statements of agreement that Assad’s government should be punished with military action for using chemical weapons to kill hundreds of civilians Aug. 21 on the outskirts of Damascus.

Rhodes declined to detail which G-20 countries have pledged Obama their support, but he said a number of European allies and Arab countries “understand the need for a military response.”

Obama made his case for a Syria attack with the attending leaders at a dinner Thursday night hosted by Putin. The elaborate dinner, which included a spectacular fireworks display and laser light show, stretched until 2 a.m.

At the dinner, there was a deep divide over whether military action was an appropriate response, as each of the leaders expressed his or her perspective.

“The president found it to be a very broad and substantive discussion, characterized by the seriousness with which people take the issue of chemical weapons,” Rhodes said.

Speaking on the sidelines of the summit, U.N. Secretary General Ban Ki-moon offered his sharpest criticism of potential military action in Syria. While not referring directly to U.S. plans for a military strike, Ban made it clear that such action could be counterproductive.

“I must warn that ill-considered military action could cause serious and tragic consequences, and with an increased threat of further sectarian violence,” Ban said. “We should explore ways to avoid further militarization of the conflict and revitalize the search for a political settlement instead.”

“Although there will continue to be some significant disagreements and sources of tension, I’m confident that they can be managed,” Obama told reporters as he sat across from Xi at the start of their meeting.

Following their session, the White House announced an agreement with China to seek to eliminate some of the world’s most potent greenhouse gases through the 1978 Montreal Protocol, the landmark treaty that successfully phased out ozone-depleting substances decades ago.

The move provides a clear path for curbing a major contributor to global warming in the near term as world leaders grapple with the more challenging task of cutting carbon dioxide in the coming decades.

Obama and Erdogan discussed Syria, Rhodes said, adding, “We feel quite aligned with Turkey and our approach to the issue.”

Also Thursday, Obama met with Brazilian President Dilma Rousseff, who has voiced outrage over U.S. surveillance programs and reports that the National Security Agency monitored her communications. Rousseff has threatened to cancel a visit to the United States, scheduled for October.

Obama assured Rousseff that he is working to address her concerns and that the United States respects Brazil’s views on surveillance programs, Rhodes said!

At G-20, build international support, for strike on Syria, obama, summit in Russia, tries to