Word :A Survivors tell of angry and unstable bus driver before crash” 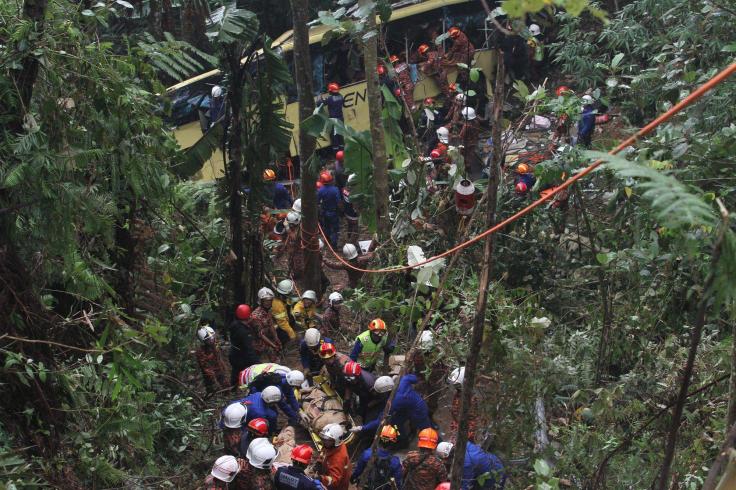 Sur vivors of the bus crash in Genting Highlands told horror stories of an angry bus driver Lim Kok Ho (pic) who seemed unstable in his actions – almost with a death wish – before the tragedy at 2.20pm on Wednesday.

“It was like he deliberately wanted to kill us. He made no effort to swerve to the emergency escape ramp which was directly before the spot where the bus went over into the ravine,” said Tan Ming Shing.

Tan, 26, claimed the driver, who was also killed in the crash, had been speeding down the slope although he knew the brakes were faulty.
“Barely minutes after starting the journey to go downhill, the bus nearly hit a pillar.

“Several hundred metres on, the driver made a sudden turn and this caused a Honda City to nearly hit us,” he said when interviewed at Hospital Kuala Lumpur.

Tan, a kitchen worker in Genting, said both drivers then stopped their vehicles and started shouting and gesturing angrily at each other before driving off.
He claimed that the driver mentioned something about the brakes not functioning, but did not allow anyone to get off the bus.

“All of a sudden, he swerved again and many of us screamed in fear. And the bus crashed into the ravine.”
At the Selayang Hospital, 14-year-old Canadian Rwaanok Arefin said the driver had started driving angrily after his encounter with the Honda City driver.
“Some of the passengers scolded him and asked him to slow down.

bus driver before crash, Survivors, tell of angry and unstable