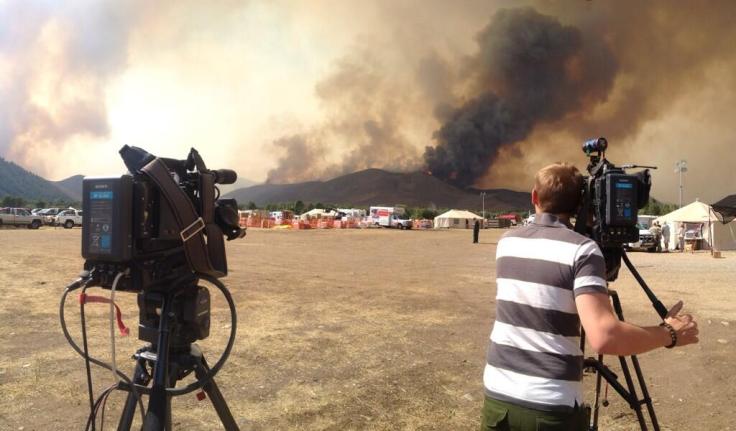 A wind-driven wildfire burned its way through sage and pine trees near the Idaho mountain resort community of Sun Valley as sheriff’s deputies expanded evacuation orders to 1,600 homes
The evacuation orders for the 100-square-mile Beaver Creek Fire included homes in drainages and foothills west of the towns of Hailey and extending to north of Ketchum in central Idaho.
More than 600 state and federal firefighters were working to get the blaze under control and protect property in the affluent resort region that’s a second home to celebrities such as Arnold Schwarzenegger, Tom Hanks and Bruce Willis.

Another 1,000 firefighters were expected to report to the scene later Friday night, said Shawna Hartman, spokeswoman for the Beaver Creek Fire.
Fire managers say the fire grew rapidly Friday thanks to wind gusts topping out at 30 mph, low humidity and tinder-dry ground fuels.

“It’s safe to say we’ve got a lot of structures at risk,” Hartman said.
Managers at the Sun Valley Ski Resort turned on water cannons that are normally used for wintertime snowmaking.
One home in an outlying valley was destroyed Thursday night, said Bronwyn Nickel, a spokeswoman for Blaine County, where the fire is burning.
In addition, some private insurers have sent in their own crews to provide structural protection for homes with values that can stretch into the millions of dollars, Nickel said.
“There are private engines that insurance companies have sent in,” she said. “They’re on site, they’re working with our local firefighters and law enforcement.”

Fire officials said crews spent the day building fire lines and trying to funnel the fire into areas burned during another blaze in 2007. A huge DC-10 tanker, capable of carrying 12,000 gallons of retardant, was among aircraft making drops on the blaze.
Jack Sibbach, a Sun Valley Resort spokesman, had to leave his home south of Ketchum on Friday. He said he watched as airplanes and helicopters made runs in roughly 3-minute intervals, dropping water and red retardant to create a barrier against flames west of U.S. Highway 75.

The resort turned on snow cannons on Bald Mountain, he said, largely to protect lodges atop the mountain, should the fire advance that far.
“The fire’s not that close to Baldy, but with the wind, you’re worrying about things sparking,” Sibbach said. “Things could jump ahead.”

Flying in separate aircraft, Gov. C.L. “Butch” Otter and U.S. Forest Service Chief Tom Tidwell took an aerial tour of the fire.
The towns of Ketchum, with a population of 2,700, and Sun Valley, with 1,400 people, were under pre-evacuation orders, with residents advised to prepare their belongings in case they were required to leave on a moment’s notice.

Fire managers “are just adding an extra layer of caution to the plan that they started last night,” said Rudy Evenson, a spokesman for the federal team overseeing the blaze. “We have a forecast for 30 mph winds at the ridge tops.”

Southbound traffic on U.S. Highway 75 was backed up, as many residents and vacationers opted to flee the smoke. Traffic was “bumper to bumper,” Hailey resident Jane McCann told The Associated Press by phone Friday.

“The smoke is unbearable,” said McCann, who was in her car. “Today in Hailey, you couldn’t see the mountains from Main Street.”
Elsewhere in the western United States, shifting winds in Utah’s Skull Valley pushed another wildfire across Utah Highway 99 toward the community of Terra, about 50 miles southwest of Salt Lake City, forcing the evacuation of several homes and a campground.

Exactly how many homes were evacuated wasn’t known Friday, fire official Joanna Wilson said. The fire was 20 percent contained.
Calmer winds to the northwest allowed some evacuation orders to be lifted near a Utah mountain ski resort town, where a wildfire was about half-contained after burning seven homes earlier in the week.
However, about 110 homes located about 10 miles from the 2002 Olympic venue of Park City remained off-limits to their residents, as crews mopped up hot spots.